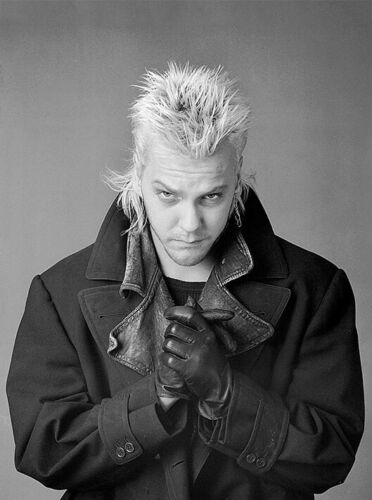 Say it isn’t so! I think all Kiefer fans have a different take on that particular hair style – iconic!!! ( I loved it ! haha)

David is a character who is, at least on paper, supposed to be cool and sexy and has a girlfriend. Developing that character was a very funny kind of moment, because so much of it was created from a physical point. The look had to be right, the clothes had to be right, the hairstyle had to be right and Joel Schumacher, the director, was very in touch with rock and roll and music and wanted that to be an aspect of this film and wanted it to have that kind of look. So I think all of us, on some level, started to try and live out whatever kind of rock and roll fantasy we might have. Joel Schumacher wanted me to have white hair and I had very long hair at the time and wanted me to keep it. I looked like a bad wrestler, I looked like a moron, it was awful. [Laughs] I thought Billy Idol was really cool and looked really cool and I still think he looks really cool. His hair was all spiky and kind of punk up top, so I got that haircut and left enough in the back so I could tell Joel Schumacher I left it long and I think kind of accidentally might have been part of a movement that created one of the worst hairstyles of all time, the mullet. [Laughs]”

BLOOR STREET IS OUT NOW